Apple Cider Vinegar Or Green Tea, Which Is Better For Weight Loss? 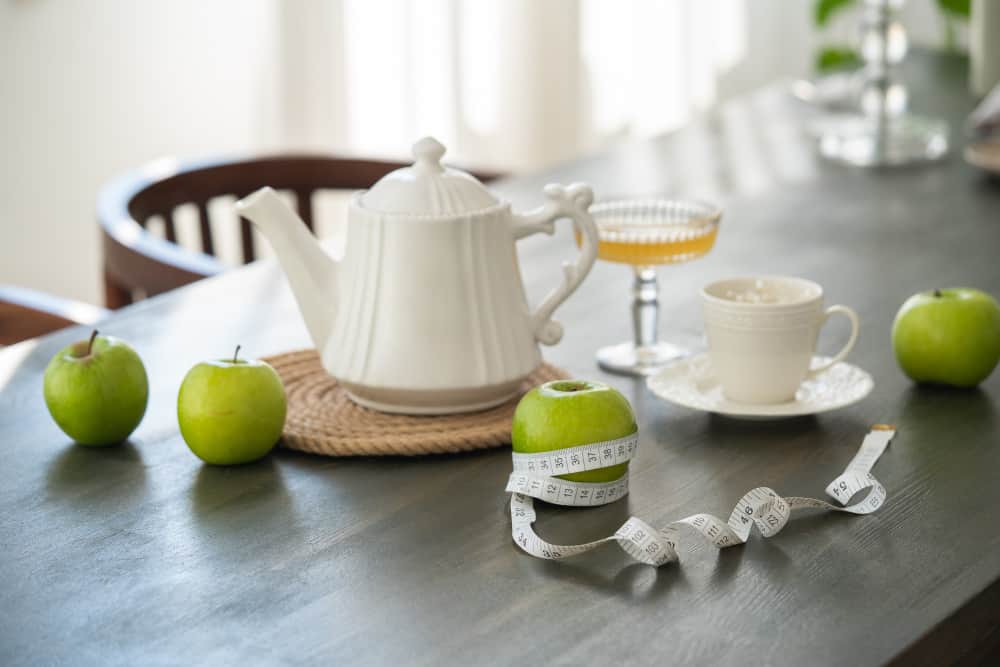 In this day and age, people who are keen on losing extra weight will try every remedy available to aid fat burning. And to further their weight loss journey, comparing these remedies with one another and choosing the best working one with the highest leverage among the rest is highly important. Two of the most popular beverages right now that can help you lose weight are apple cider vinegar and green tea. Green tea is known to have countless health benefits, and that includes having weight loss properties. Green tea also helps control cravings, does not contain calories, and is a great drink to eliminate toxins. Apple cider vinegar, on the other hand, is popular for its appetite-suppressing manner, which aids fat burning and helps reduce belly fat. And just like green tea, it is essentially calorie-free. But which of the two is the better aid for weight loss? Which one is more effective in body fat reduction?

So let’s talk about each of these beverages in detail: what’s in them, what they do to help you lose weight, and which one is better.

Let us start our comparison with apple cider vinegar and its countless health benefits, including the claim that it promotes weight loss. Despite it being raved about in recent years for its newfound weight loss properties, it has actually been used for hundreds of years as a health tonic with benefits such as lowering blood sugar. It has been used as a remedy for diabetes before insulin. One of the main reasons for the claim that apple cider vinegar aids weight loss is due to a component it has, acetic acid, which to an extent can help you lose weight. For us to fully understand how this liquid works, let us first know what it is and how it is made.

Apple cider vinegar is a fermented beverage made in a two-step process of fermentation.

The first step is to cut or crush apples and combine them with yeast so that the sugar in them is converted into alcohol.

The second step will be adding bacteria to the apple and yeast mixture, this will ferment the alcohol into acetic acid.

Traditionally, making apple cider vinegar can take up to one month. But with the latest technology in food production, some manufacturers have found a way to accelerate production in just a single day.

Acetic acid, a short-chain fatty acid, dissolves into acetate and hydrogen in our body.

Also, apple cider vinegar virtually contains no carbohydrates, for every tablespoon of the beverage contains only three calories. From that alone, you can tell that it is great for weight loss. So let’s dive deeper into the benefits acetic acid provides to aid weight loss. These are some of the ways acetic acid promotes weight or fat loss:

Despite all these, apple cider vinegar can still have side effects for some people.

If consumed undiluted, apple cider vinegar might wear away your tooth enamel. To avoid this, one could use a straw or clean their teeth after taking the beverage. Some of the other side effects of apple cider might include:

To safely consume apple cider vinegar, it is best advised to have it diluted in water first. You may also add it to your food and drinks.

With all that being said, while it is claimed to help you lose weight, it would work better and faster if you take apple cider vinegar with a combination of exercise and low-calorie intake.

Now, let’s talk about green tea and how it could help you lose weight.

Green tea is deemed one of the healthiest beverages in the entire world. It is packed with antioxidants and loaded with various plant compounds that are highly beneficial to our bodies. Due to its being rich in nutrition and antioxidants, green tea is claimed to be a great beverage for helping you lose weight. Caffeine, one of the plant compounds found in green tea, is a stimulant well-known to improve exercise, thus aiding in fat burning and weight loss. Although the amount of caffeine in green tea is not as much as the one in coffee (20-40 mg in green tea and 100-200 mg in coffee), it still contains enough to have an effect on the body. Despite that, what puts green tea on top of the heap is the number of antioxidants it contains. Green tea contains, and is loaded with, the potent antioxidant called catechins. And drinking only a cup of green tea is enough to increase the number of antioxidants in your bloodstream. Another substance in green tea, which is one of the most important, is epigallocatechin gallate (EGCG). This substance can boost your metabolism.

Studies suggest that the compounds found in green tea help with weight loss by boosting the effects of some hormones that help with fat-burning, such as norepinephrine. EGCG, the main antioxidant in green tea, helps increase the amount of norepinephrine, by inhibiting an enzyme that breaks down the aforementioned hormone. As the amount of norepinephrine increases, fat breakdown is highly promoted. The combined power of caffeine and EGCG, both found in green tea, brings the fat cells in your body to break down more fat, which will ultimately be used as energy by your other cells, such as muscle cells.

“It certainly isn’t a cure-all, but if you like the taste and enjoy drinking it, a few cups of green tea daily can help complement a healthy eating routine and may help you gradually lose weight”, says Stefani Sassos, MS, RDN, CDN, Registered Dietitian for the Good Housekeeping Institute. According to her, these are some of the ways green tea can further your weight loss journey:

An “ergogenic aid”, the caffeine in green tea activates your nervous system, helping you perform your routine slightly better.

Aside from being a sugar-free beverage, green tea helps you avoid sugary drinks, which are a threat to your overall health. And the polyphenols that green tea contains steer you away from heart disease risk factors such as high cholesterol and blood pressure.

“Some research suggests that the caffeine and catechins found in green tea may assist with modest weight loss, likely because they raise your metabolic rate” says Sassos. The metabolic rate is referred to as the number of calories your body burns when doing mundane things such as sitting down or sweeping the floor.

When it comes to weight loss, the impact both apple cider vinegar and green tea have is minimal at best. It all goes down to how you pair these two beverages, either by taking in low amounts of calories with either of the two or pairing them up with an effective exercise routine. But what’s certain is that both have various health benefits for your body when consumed, such as having amazing gut health or even having a positive impact on your heart health. At the end of the day, it will always be you and how you take care of your body.

A promoter of physical fitness and healthy lifestyle through my writing.

The doctor of the future will give no medicine but will interest his patients in the care of the human frame, in diet and in the cause and prevention of disease.